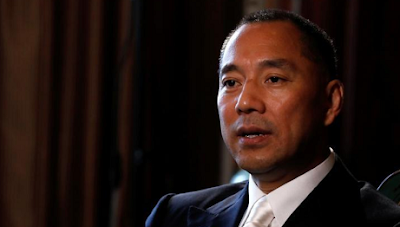 A former personal assistant to an exiled Chinese-born billionaire, who has made claims of high-level Communist Party corruption, has filed a lawsuit in New York accusing him of raping her, court documents show.

In the civil complaint lodged with the New York Supreme Court on Monday, the 28-year-old woman said she was “lured” by the businessman, Guo Wengui, to New York under the guise of a one-week business trip.

Instead, she was held “captive” and ultimately subjected to “repeated acts of mental cruelty and sexual violence”, the suit says. She is seeking $140 million in compensation.


Guo, who lives in New York, denied the accusation, describing it as “fake”.

The complaint says the woman is a Chinese national who was employed by one of Guo’s China-based companies. She was told upon arrival in New York that she would work as one of the real estate tycoon’s personal assistants, the complaint, reviewed by Reuters, says.

It said Guo, also known as Miles Kwok, “forcibly took away” the woman’s passport, threatened her, monitored her internet usage and restricted access to her phone and laptop computer.

The woman said she was subjected to verbal and physical abuse, which soon escalated to sexual assault, before she managed to escape to the Chinese embassy in London during a business trip with Guo.

After her return to China, the complaint said, the woman provided a statement and evidence of her allegations to police in China. The Associated Press reported late last month that Chinese police were investigating the woman’s claims.

“Of course it’s fake,” he told Reuters. He said the “robbers of the country” engineered the allegations to “divert my attention, spread rumors and smear my reputation.”

Guo, who left China in 2014, has unleashed a deluge of graft accusations against senior Communist Party officials via Twitter posts and video Forums, attracting an online following tantalized by his sensational, if mostly unverifiable, claims.

It has prompted a Chinese government campaign to discredit him with articles in state media accusing him of crimes including bribery, fraud and embezzlement. At China’s request, Interpol issued a global “red notice” for Guo’s repatriation in April.

Guo lodged an application for political asylum in the United States last week.