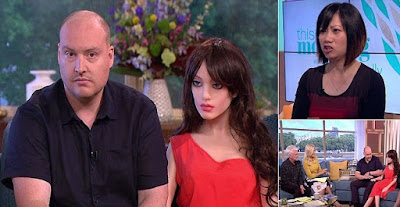 Arran Squire, 36, from north Wales, brought along 'Samantha' (he is pictured with her on the left) for her debut on ITV's This Morning on Tuesday, and the hyper-realistic robot's presence both amused and horrified presenters Phillip Schofield and Holly Willoughby.

Joking it would be like 'making love to a car GPS', Phil went on to say he had touched the doll and it was so cold 'it felt like a corpse'.

That's apparently no deterrent to Arran's wife (top right), who confirmed she's had 'threesomes' with her husband and the robot.

Arran explained that Hannah was part of his lovemaking with Samantha, to which Phillip asked if she was 'totally happy with it'.

'Yes I am. Me as a woman I am not offended to have her around. I am not worried [she will replace me]. She is just someone there like a family member.'

She said that 'it wasn't acceptable or healthy' to use the technology in the way that it can replace relationships with simulation. 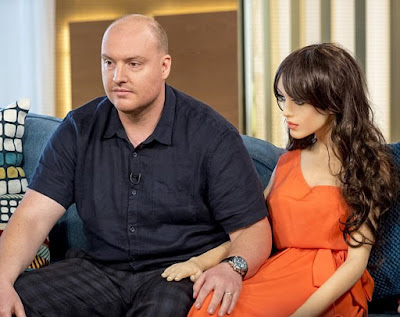