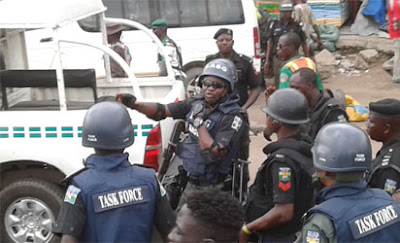 Kidnapping and armed robbery kingpin, Lukman Issah, aka Commander, who hailed from Obeiba – Ihima area of Okehi Local Government Area of Kogi State, enjoyed a long spell of criminal reign from 2001 when he was first picked up on crime radar till September 3, 2017, when he met his waterloo.

He was killed in a shootout with operatives of the Kogi State Police Command. Police authorities confirmed that while he held sway in the crime world, Lukman left many deaths, robberies and arsons on his trail.

Policemen, soldiers and even prison officers posted to the state as well as other innocent Nigerians met their untimely death in the hands of Lukman and his gang.


For his notorious criminal exploits, he remained a high profile suspect on police wanted list in Kogi and beyond as he was equally being looked for by the Federal Special Anti-Robbery Squad, Abuja.

According to the police, he was linked to the murder of two police officers at Ogori/Magongo – Okene Road and arson on May 5, 2017.

At about 4.40am on that day, Lukman was said to have led members of his gang to attack a police patrol team on stop and search duty.

During the attack, the leader of the police team ASP Adetoye Okuntade and Inspr. Ochekpo Amanyi were shot dead while the patrol vehicle used by the police team was set ablaze.

The AK 47 rifles carried by the two officers were taken away with a total 60 rounds of ammunition. Before then, precisely on March 29, 2011, the kingpin led his gang members to attack men of 37 PMF posted on Special Duty at Adogo in Ajaokuta L.G.A of Kogi State. Four police officers, namely Inspr. Maxwell Dan-Zaria, Sgt. Moses Usman, Cpl. Sunday Ogbole and PC. Bulus Linka, were killed during the attack while their arms and ammunition were taken away.

Lukman similarly attacked worshippers at Deeper Life Bible Church, Otite, near Federal College of Education, Okene on August 6, 2012 where the gang shot and killed 19 worshippers while several others sustained varying degrees of injuries.

Three suspects, Abdulmanna Obadaki, Yekini Isah and Sadiq Jimoh Bello, were arrested in connection with the attack. Six AK 47 rifles including the military rifles and one Berretta ammunition were recovered.

The three suspects said the kingpin led the attack. On the killing of the traditional ruler of Ihima, Commissioner of Police, Kogi State, CP Wilson Inalegwu said, “The killing took place sometime in February 2012. Lukman Issah and his gang shot dead the Ohireba of Ihima while relaxing in the front of his house in the evening. “The killing was linked to the stoppage of Okiri masquerade outing during the fuel subsidy crisis”.