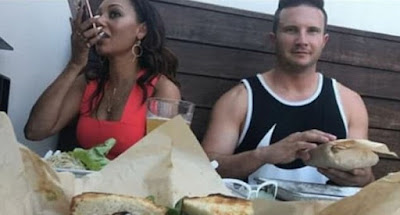 She's in the throws of very public divorce proceedings with Stephen Belafonte. But Spice Girl Melanie B looked to be having a lovely time, court case be damned, in a photo of her having lunch with her rumoured policeman fling Ryan Lawrence.

The cop, 32, is married; and the snap, which proves incriminating, was captured by Mel's daughter, Phoenix, no less

Hostage negotiator Ryan has reportedly been staying at Mel's LA home five nights a week, despite his wife being left at home not knowing what's going on.


He and Mel have not been seen out and about together before now, with the romance purely conjecture; and although the 'affair' is still not confirmed, Phoenix's photo has certainly fueled the rumour fires.

The 18-year-old posted the photo to Snapchat from across the dinner table, as the 'couple' enjoyed sandwiches together.

While Ryan is aware Phoenix is taking the snap, seen to be staring right into the lens of the camera, Mel seems preoccupied with other things, busy talking on her own phone.

The image looks to have been taken weeks ago, with Mel's hair notably styled in long waves, before she cut it recently into a shorter cropped 'do.

Sources have claimed that Mel and Ryan have been romantically involved since May, after becoming acquainted when another police officer introduced them.