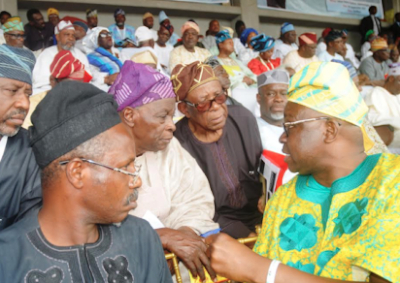 The Yoruba nation, yesterday, insisted on a return to the federal system established by the founding fathers of Nigeria in the 1950s, where each section of the country was able to develop at its own pace.

This was the unanimous agreement reached at a gathering tagged: ‘Yoruba Summit’, held at the Lekan Salami Stadium, Adamasingba, Ibadan, Oyo State.

This came as the Ooni of Ife, Oba Enitan Adeyeye Ogunwusi, Ojaja II and Governor Ayodele Fayose of Ekiti State called for unity among Yoruba speaking areas of Nigeria in the quest to get the country restructured.


Also, leaders from the South-East and South South, in solidarity, backed the agitation for restructuring by the Yoruba.

At another forum, the National Christian Elders Forum, NCEF, called for restructuring and a return to the democratic ethos of the past to put the nation back on the path of cohesion and unity.

Roll Call At The Summit

Also absent were members of the National Assembly from the zone.

Restructuring will curb over concentration of power – Afe Babalola

In his opening remarks, chairman of the summit, Chief Afe Babalola, SAN, said, restructuring would curb over concentration of power at the centre. The legal icon said: “The agitation for secession is an ill wind that does no good. No matter the motive of the conveners of Berlin Conference, we have lived together for over 100 years having been married by fiat of the Europeans. It is better to dialogue and restructure the country. No woman wants a dissolution of a marriage if the parties live in comfort and are prosperous. It is incumbent on the leaders to make the country so prosperous that nobody would agitate for recession.’’

Chief Niyi Akintola, SAN, moved the motion for the adoption of the communique, which was unanimously adopted by the gathering. In the communique, the Yoruba Summit noted that Nigeria was dangerously edging towards the precipice but must take urgent steps to restructure the nation from a unitary constitution to a federal constitution as negotiated by the nation’s founding fathers in 1960.

The communique, read by Mr Yinka Odumakin stated among other things that: “Yoruba insists that Nigeria must return to a proper federation as obtained in the 1960 and 1963 constitutions. This has been our position since the 1950 Ibadan conference and developments in Nigeria over the last 50 years reinforce our conviction.’’

Odumakin said the position taken “shall form the basis of negotiations with our partners in the Nigerian project for a united Nigeria based on justice, peace and fair play.”

Governor Fayose in his characteristic manner did not mince words as he told the gathering that the architects of Yoruba problems are its leaders. He also warned that failure to adhere to agitation on restructuring may lead to the Yoruba calling for Oduduwa Republic. Fayose, who spoke in Yoruba bluntly said:

“You, our Yoruba leaders are the problems we have. You see our forefathers like Chief Obafemi Awolowo, Samuel Akintola and others had done their best. It is now left for us to continue on the good legacy they left behind. If a leopard has dogs at its back like soldiers, it will fight and die like dogs. But, if it leads dogs, they would fight together and win. You our elders should fight like lions.’’

Also, former Aviation Minister, Mr Fani-Kayode said: “Today’s fight is a real one. They have turned us into slaves in this country. Let’s stop pretending. We, Yoruba, are very restrained, civilized, educated, very accommodating and liberal and sometimes, that is used against us. The situation whereby we are second class citizens is unacceptable to me and to the majority of Yoruba people.’’