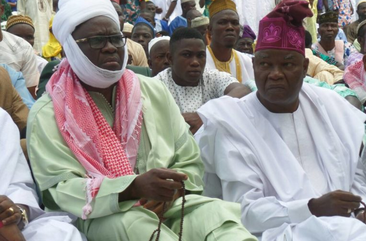 The Encarta Dictionary defines an Imam as an Islamic religious leader regarded as a direct descendant of Muhammad or Ali and appointed by Allah. An Imam is also defined by the same dictionary as a respected Islamic scholar, especially a founder of a school of theology or law.

Fayose is a Christian governor of Ekiti State.

However, for inexplicable reasons, the governor shocked the world on the last Muslims celebration on September 1, 2017 when he appeared in full regalia, including a turban as an Imam, at the venue of the event in his state.


Apart from the controversy stoked by the costume, Fayose also used the ground to make some strong political statements that have now been condemned by the Muslims Rights Concern, MURIC, headed by Islamic scholar, Professor Ishaq Akintola.

In a strongly-worded statement condemning the governor’s action, MURIC said: “The Governor of Ekiti State, Ayodele Fayose, appeared on Eid ground dressed in Islamic regalia, including a turban on Friday, 1st September, 2017. Mr. Fayose also delivered a politically-motivated speech at the Id ground. The Muslim Rights Concern (MURIC) strongly condemns Fayose’s action. It is highly sacrilegious and unduly provocative. It is Act I, Scene I in the Theatre of the Absurd.

“Governor Fayose cannot pretend to be a friend of Ekiti Muslims. He has delivered several anti-Muslim speeches and uttered several hate pronouncements targeted at Nigerian Muslims. His general attitude and body language to Muslims of Ekiti belie his status as the state governor. “He has also demolished mosques out of sheer desire to eliminate all Islamic landmarks in Ekiti. So, who is Fayose deceiving?”