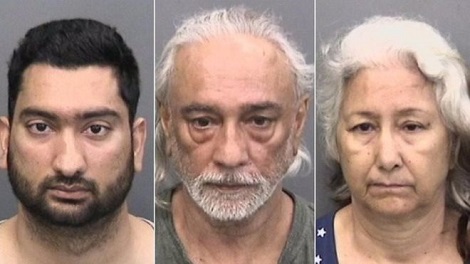 An Indian couple flew 8,000 miles to help "discipline" their daughter-in-law, police in Florida have alleged.

Jasbir Kalsi, 67, and his wife Bhupinder, 62, are said to have travelled from the Punjab region to Hillsborough County to help "counsel and discipline" son Devbir's wife.

Silky Gaind was discovered battered and bruised by a police officer on Saturday after getting a message to her parents.

Her in-laws and husband are now facing multiple charges, including battery. Her father-in-law, who had been visiting with his wife for about a month, also allegedly held a knife to her throat.


Ms Gaind, 33, had been held for some time before deputies from the Hillsborough County Sheriff Office arrived at her door.

Even then, the family attempted to bar them from entering the house, forcing the officers to call for back up as Ms Gaind called on them to help her and her one-year-old daughter.

At a court hearing on Sunday, Ms Gaind told a judge her 33-year-old husband had left her in fear for her life.

"I am so scared, because last night he was telling me he was going to kill me if I call the police. He would kill me to death, you know? He told me it would take 10 minutes for police to come and before that he would kill me and then kill himself," she said.

WFLA reported Jasbir Kalsi was facing charges of aggravated battery with a knife, while her husband Devbir had been charged with felony battery.

Both are charged with false imprisonment, child abuse and denying access to 911.