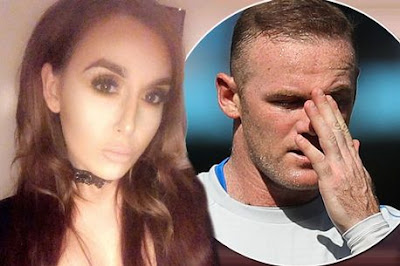 Wayne Rooney's drink drive girl has revealed the pair kissed after the footballer asked her if her boobs were real after a ten hour booze bender.

Office worker Laura Simpson was with Wayne when he was arrested by cops after they got a taxi to her VW Beetle - she later said she was too drunk to remember where they were stopped.

The pair necked Prosecco and vodka at the fashionable Bubble Room cocktail bar - Wayne had already been boozing in Piccolino in Alderley Edge, Cheshire.

Lettings office manager Laura told MailOnline: "He kept admiring my clingy top and asking what size they were, saying "Are they real?" We had a kiss, a hug and some banter, harmless fun. I'm not a marriage wrecker."


Simpson, a lettings officer, said Rooney was 'p***ed off' and 'really worried' when police pulled them over - though admitted she didn't recall where they were at the time.

She told The Sun: “I didn’t know what to make of it, it all happened so fast. It was a whirlwind. I don’t know if it’s because I was that drunk but he didn’t seem that drunk to me.”

It comes as a 'livid' Coleen has reportedly flown back to the UK after Wayne was charged with drink driving.

The mum-of-three, who is four months pregnant, had been on holiday in Spain with the pair's three sons, Kai, seven, Klay, four, and one-year- old Kit, when she learned of his late-night arrest.