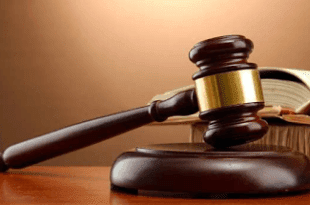 A 40-year-old man, Kehinde Gabriel, has been arraigned before a Lagos State Magistrate’s Court in Ikeja for allegedly defiling a three-year-old girl in Onaosa, in the Ibeju-Lekki area of the state.

Gabriel is a native of Ogun State and neighbour of the girl’s parents. Punch Metro learnt that the girl was going to a mosque with her sisters on August 16, 2017, and was left behind when the accused laid in ambush for her.

Gabriel reportedly lured her into his apartment with a loaf of bread and drink and defiled her.

The mother of the girl told the police that the kid returned home crying, adding that blood was found in her private parts.


She said, “She went to the mosque with her other sisters on that day. After some minutes, she returned home with a bottle of drink and bread, crying.

“I asked her what was wrong and she said it was Uncle Kehinde (Gabriel) that gave the items to her. She was running temperature. While her father and I were checking her body, we saw blood in her private parts.”

But the suspect denied committing the crime, saying he gave the girl food because she complained of hunger.

He said, “I saw the girl crying beside my house and I asked what happened to her. She said she was hungry and I gave her bread and beans. I did not defile her.”

The Police Prosecutor, Inspector Simeon Imhonwa, who brought the suspect to court, said the offence was punishable under Section 137 of the Criminal Law of Lagos State 2011.

The charge read, “That, you Kehinde Gabriel, on August 16, 2017, on Ogunse Street, Onaosa, Ibeju-Lekki, Lagos, in the Lagos Magisterial District, did unlawfully defile a three-year-old, thereby committing an offence punishable under Section137 of the Criminal Law of Lagos State, 2011.”

The presiding magistrate, Mrs. B.O. Osunsanmi, granted the accused bail in the sum of N500,000 with “two reputable sureties” each in like sum.

Osunsanmi added that the sureties must provide evidence of two years tax payments to the Lagos State Government.

She adjourned the case till October 17, 2017 and directed that the duplicate case file be sent to the Directorate of Public Prosecutions for legal advice.