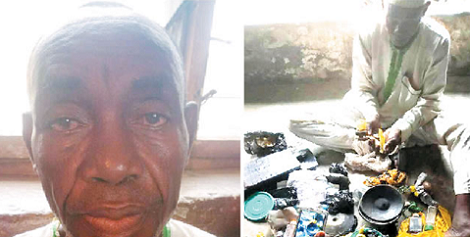 He said the girl, who works as an apprentice tailor around Amukoko area of Lagos, also slept and ate little.

“It became so bad that I was crying while her sister was also crying because we did not know what was wrong with her.

“We bought various drugs but none worked. Their mother died two years ago and I am bringing them up all alone.


“The first day it started, she got back from work that day and said she was very tired. Then from then on, it was like she was a plant that gradually withered.”

Saturday Punch learnt that on her way to work that fateful day, the exact date of which the girl’s foggy mind could no longer bring up, she passed by the house of a herbalist, 68-year-old Jimoh Amuda, on Imam Street, Amukoko. The man reportedly summoned the girl. The rest of the story sounded more like a Hollywood script.

For more than a month after her encounter with Amuda started, Fatima told no one.

But when her father became concerned and started crying over her state, she opened up.

“I was crying, her young brother too was crying. That was when she told me that the herbalist had warned her not to reveal what had happened,” Fatima’s father said.

She said Amuda called her and said she had to make an alms of sugar, salt and cola nuts.

The following day, she explained that she went to thank the man for his prayers and instructions.

Amuda reportedly sat her down and explained that she needed spiritual help.

Fatima told her father that Amuda then gave her a fetish item to ingest with pap.

He said, “She told us that after that, the man gave her ‘Hontu’ (a controversial Islamic practice in Nigeria of writing Surah on a slate, washing it off and drinking it for healing and warding off spiritual attacks).

“I was shocked by all these. How can anyone tell her to do all that and she did not make any effort to tell me as her father?

“The most frightening was that after the drink he gave her, he told her to buy waist beads which she had to wear for three days. My daughter said she did not have any money to buy beads and he told her not to worry.

“He gave her a bead, which he said she could either keep and give him N2,000 in exchange or return after she had worn it for three days.

“My daughter said she did not have money, but after wearing it for three days as instructed, she returned it to the man.”

That was when her troubles started.

Saidi said he raised the alarm after hearing his daughter’s story and one of his brothers reported the matter to the police.

He said they eventually confronted the man and asked him why he targeted Fatima.

“I wanted to know the reason for it all and he said everything he did for her was just for spiritual healing. I asked if my daughter approached him first and he said he was the one who took interest in her,” he said.

A police source told a Punch correspondent that during interrogation, the herbalist confessed that he was just trying to make money but did not elaborate about how this connects to the different items he had given Fatima to ingest and use.

“He kept repeating that all he had done for the girl were for spiritual favour (referred to as eyonu in Yoruba). At a point, he was asked to eat some of the items he said he gave the girl to ingest.”

On Friday, the police said Amuda was charged with enslavement at the Ebute Meta Magistrate’s Court, Lagos.

He has been remanded at the Kirikiri Prisons till he is able to perfect his bail conditions.