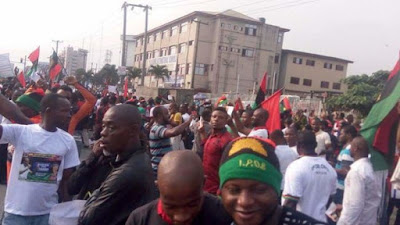 The Indigenous People of Biafra, IPOB, has rejected the withdrawal of the quit notice issued to the Igbos by the Coalition of Northern Groups.

The coalition had ordered the Igbos to leave the north on or before October 1, 2017, but a suspension of the notice was announced on Thursday by the group’s spokesperson Abdulazeez Suleiman, at a press briefing at the Transcorp Hilton hotel in Abuja.

But a statement issued by the IPOB’s spokesperson, Emma Powerful, on Friday, said the withdrawal was inconsequential as far as their aspirations were concerned.

“It is inconsequential to IPOB whether the ‘quit notice’ was rescinded or not because it will in no way impact the pace and direction of our effort to restore Biafra. If they had any honour, they will ‘stick to it,’’ he said.


”Threats don’t have any effect on us, so our advice to the Arewa North is to please stick to the October 1 deadline or else they have no honour. We urge all Southerners in the core North to return home before October 1 as history will most definitely repeat itself,” he added.

He said Southerners (living in the North) must be vigilant despite the assurances given by the coalition.

”Southerners were massacred in the pogroms of 1966 and 1967 after similar assurances were issued then that people should remain in the North. The presence of a serving governor and senator of the Federal Republic of Nigeria during the supposed press briefing confirms what we have always known that the incitement to genocide, which is what the ‘quit notice’ is all about has the blessing of the Arewa political class.’’

”Trying to drag the name of our leader, Mazi Nnamdi Kanu, into their unintelligent blood feast will be resisted. If the idea is to cow our leader with calls for his arrest, then those behind the genocidal edict of ‘Igbos must leave the North’ are even dumber than we thought.’’