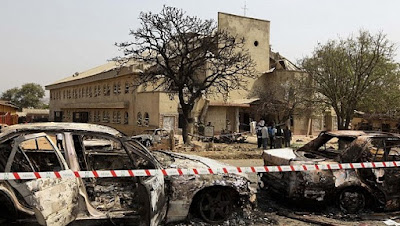 The Catholic Bishops of Kaduna Ecclesiastical Province have urged the federal government to compensate churches and other victims of attacks carried out by insurgents on places of worship.

Mathew Ndagoso, their spokesman, made the plea on Tuesday in Minna, in a briefing after a two-day Catholic Bishops of Kaduna Ecclesiastical Province plenary session, held at St. Michael Cathedral, Minna.

“In the past six years, insurgents have attacked churches and other Christian places in the north, but the federal government is yet to compensate the victims.
‎
“We want to inform you that the Catholic Church has not received any support from the federal government for the Churches affected,” the bishop said.


“In Niger, the first terrorist attack was on St. Theresa Catholic Church, Madalla, on December 25, 2011.

“Last year, some youths attacked the St. Philips Catholic ‎Church, Bakin Iku, near Suleja, destroying properties valued at several millions of Naira. No one has even sympathised with us,” he said.
‎
‎The bishop opined that the federal government was supposed to be responsible for giving assistance to the churches and the victims.

Mr. Ndagoso explained that government ought to be responsible for giving assistance to the victims.

The bishop said that he had personally suffered from such attacks.