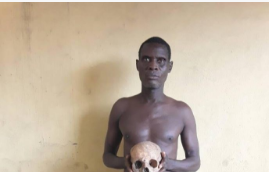 A 30-year -old man, Shehu Gidado, was on Tuesday arraigned in an Iyaganku Chief Magistrates’ Court, Ibadan, over alleged unlawful possession of human skull and ribs.

Gidado, who resides at Iba New Site, Okokomaiko, Lagos State, is facing a charge of unlawful possession of human skull.

The Prosecutor, Insp. Sunday Fatola, told the court that Gidado on Aug. 7, at about 2;30 p.m., along Ogbomoso – Ilorin road, had in his possession a human skull.

He alleged that the accused was also in possession of two different human ribs without lawful authority. Fatola told the court that police operatives at a check point stopped the commercial bus, and found the accused with the items wrapped in a black polythene bag.


“Materials suspected to be human parts were found in a polythene bag owned by Gidado which he cannot give a satisfactory explanation on how he got the human skull,” he told the court.

Fatola said the offense contravened the provisions of Section 329 (1) of the Criminal Code Cap 38, Vol. II Laws of Oyo State 2000.

The accused pleaded not guilty to the charge.

The Chief Magistrate, Mr. Abdulateef Adebisi, granted the accused bail in the sum of N200,000 with two sureties in like sum and adjourned the case until Nov.20, for hearing.