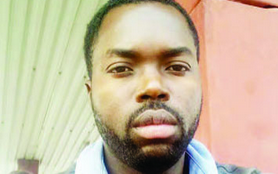 Igueriede was reportedly moving to exchange pleasantries with his former employer, Chief Johnny Aribogha, when a Mobile Police shot him dead and injured two others.

The incident occurred at the funeral of mother-in-law to Joe Akugbowe, who had invited Igueriede and Aribogha.

Aribogha, who confirmed that the killer cop was in his company, attributed the incident to accidental discharge. However, the family of the deceased, at a press briefing in Warri yesterday, alleged foul.


In a petition, elder brother to the deceased, Governor Ogbon, said: “On August 19, last Saturday, my younger brother was invited by one Mr. Joe Akugbowe to his mother in-law’s funeral at Emede Town.

“Incidentally, my brother met his former employer, Chief Johnny Aribogha, who was also invited for the burial by Akugbowe.

“As my brother went towards his direction to greet him, the Mobile Policeman attached to him started shooting sporadically and in the process shot my brother in the stomach, killing him on the spot. A man and woman were also shot.

“We suspect a foul-play in the manner my brother was killed. Up till this moment, we have strangely not heard from Chief Aribogha and his friend Akugbowe, who invited him to the burial.”

He called on the Inspector-General of Police and Delta State Police Commissioner to go investigate the matter.

However, Chief Aribogha said the officer involved has been arrested and is being questioned at the police headquarters at Asaba.