How My Daughter Was Killed For Ritual -Father

How My Daughter Was Killed For Ritual -Father 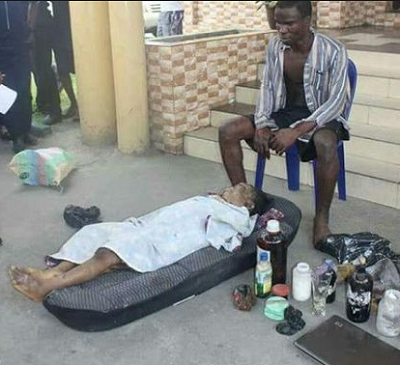 A 200-level student of the University of Port Harcourt, Ifeanyi Dike, has been arrested for allegedly abducting and killing an eight-year-old girl, Victory Chikamso, for ritual purposes.

Speaking with newsmen at the State Police Command on Saturday, the father of the slain girl, Ernest Nmezuwuba, said he was filled with grief after seeing the mutilated body of his daughter.

He expressed shock that Dike could contemplate killing his daughter. “My name is Ernest Nmezuwuba, I am from Ochiogwa in Mbaitoli Local Government Area of Imo State.

The man who killed my daughter is like my brother, someone very close to me, I can call him my cousin. He is a 200 level student of the University of Port Harcourt here and he resides at Eliozu,” the father of the slain girl said.


Narrating how his daughter got missing and eventually killed, Nmezuwuba recalled that Chikamso had requested bread for breakfast, which the father bought for her before he left for work on Friday (the day she was abducted).

Nmezuwuba said when he returned home around 3pm and learnt that his daughter was missing, he immediately began a search.

He added that after the search became fruitless, he decided to report the matter to the police.

“I moved immediately with my wife to where our daughter usually went, but we could not find her. Then I ran to the police and they advised me to call back after 24 hours.

“This Ifeanyi (suspect) we are talking about is a habitual criminal. He committed a crime in a bank and the Special Anti-Robbery Squad caught him. Then the in-law went and bailed him.

“So, around 1.30am, the security men ran to me and said that they had seen my daughter and that I should come and see the man that kidnapped my daughter. I was in my shorts and I rushed to the place with the security agents.

“I was told that the person that killed my daughter was caught while carrying a load around 1.10am. The load was in a sack. The policemen said when they confronted him, he said he wanted to take it to the dustbin,” he added.

Nmezuwuba explained that he could not control himself when he saw the body of his daughter with her finger, private part, and eyes removed.

He added, “When I got there, I asked: where is my daughter? They showed me a sack. As I opened it, I saw my daughter; I peeped and watched very well, the two eyes were off, the tongue was gone, one of the breasts was off, one of the fingers, the smaller one, was off. I watched at the centre here, he had carved it (vagina) out.

“This boy decided to use my child for ritual. As I turned back and saw him, he (Dike) was looking at the ground. Immediately I saw him, I shouted, Ifeanyi, you killed by daughter. But he said it was not only him.”

The father thanked the police and the local vigilante for fishing out the person behind the kidnap and murder of his daughter.

“Honestly, if the police are working like this, people will not complain. The vigilante men did well,” Nmezuwuba said.