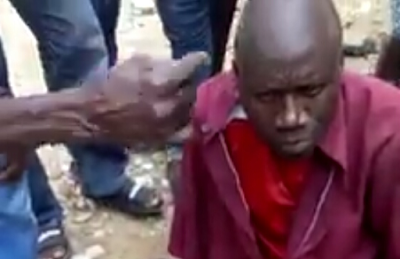 A man who disguised as a lunatic, abducted a nine-year-old boy and put him in a sack. But he was arrested and the boy rescued in Orile area of Lagos, weekend.

The exact location where the boy was abducted was unknown, but report had it that the kidnapper was taking his victim to an unknown destination when he was accosted by curious passers-by at Oshodi Street.

He was reportedly asked to reveal the content of the sack, a request he initially declined until the bag was forcefully taken from him. The passers-by were taken aback when they discovered a boy inside.

Eyewitnesses disclosed that a black toy gun, different identity cards, a tuber of yam and a loaf of bread were found inside a black polythene bag with the suspect. He was said to have also worn three clothes.


A mob descended on him and was on the verge of lynching him when a politician, identified as Otunba Obanla, intervened.

An eyewitness said: “Everyone was angry when Obalan arrived and interevened. They hauled stones at the kidnapper. “We did not get response of where he got the child, as everyone was asking him questions at the same time. He spoke in Yoruba.”