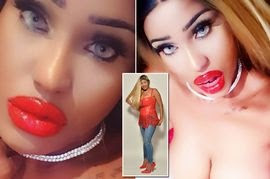 A mum-of-two has spent £10,000 on a year-long makeover to turn herself into a real life sex doll. It has taken a boob job , hair extensions and having her lips pumped three times a month to fulfill Cindy Moore's dream of looking like a walking, talking inflatable doll.

But although she gets lots of attention from men, Cindy says she sometimes feels "people don't realise I'm actually a person and not really a sex doll".

The final touch to her transformation has even seen 31-year-old Cindy put a new car registration plate spelling out 'Doll'. Her £7,000 boob job saw her go from a size A to a massive double-F and she spends £250 every 10 days on painful lip filler injections .


And she says she still isn't finished yet or satisfied with her extreme look. Cindy, from Salford in Greater Manchester, said: "I want another boob job and probably a tummy tuck. I'm lucky because of my skin I don't really need Botox.

"I used to be around a size A, but now my boobs are double F's. "I've still got a long way to go. I'm trying to lose more weight and look even more like a sex doll.

"I've just always liked it when I saw the look on other people. I think it makes me look beautiful."

Cindy has been a fan of the "fake" look since she was 19 and loved bleaching her long locks and wearing dramatic make-up.

She said: "When I first met my ex I was 19 and I had started looking like I do now, but definitely not as extreme.

"But after we had two kids I ballooned by about seven stone and kind of gave up on it.

"When we split last year I looked at myself in the mirror and just thought 'this needs to go', so I trained hard and cut the carbs and lost it really rapidly.

"I've always liked the bimbo blow-up doll look, ever since I was younger so I just started taking it to the next level.

"Since I split up with him I've felt good about myself overall because I had my boobs done and lost a lot of weight."

Cindy went on a strict diet and training regime every day to lose five stone, dropping from a size 24 to a size 12.

Cindy says that she knew that the sex-doll look was right for her after watching herself on Channel 5's reality TV show '100% Hotter', which was filmed in December 2016 and aired in February this year.

The TV show takes men and women with extreme looks and tones them down to a more natural style.

But it had the opposite effect on Cindy - who made her look more extreme.

She now sells raunchy photos of herself to 100 online followers who pay her £25 a month.

Cindy said: "My six year old daughter says that when I'm all done up I look like a doll. She really loves it too.

"My son is eight, and he prefers it when I have my make up on too."

But some of the attention hasn't been ideal, admitted Cindy.

She said: "I try not to go out clubbing too much because I get lots of stares and wolf whistles. I think some of it is because of my boobs are so big.

"I get a lot of attention from men so I think I could be going on dates every night if I wanted to.

"But sometimes it's like people don't realise I'm actually a person and not really a sex doll." 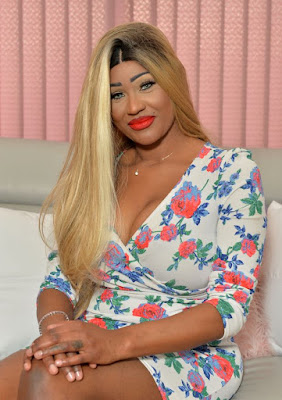 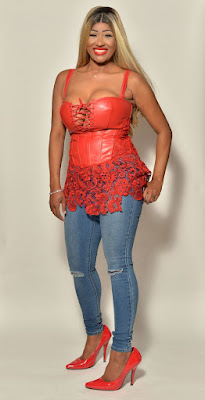