I Cried Everyday When My Wife Left Me- Emeka Ike

I Cried Everyday When My Wife Left Me- Emeka Ike 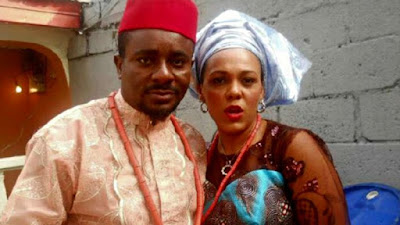 Nollywood actor, Emeka Ike is still finding it difficult to believe that he’s no longer married to his wife, Suzanne Emma.

The unexpected happened  earlier this year, when his 14-year-old marriage to Emma was dissolved by a Lagos Island Customary Court over alleged incessant battery. Emma  had on July 13, 2015, approached the court to dissolve the marriage, accusing her former husband of physically and verbally abusing her throughout the duration of their marriage.

But the star actor was not ready to let her go, as he pleaded with the court to reconcile them. Unfortunately, his plea yielded no results as the court finally dissolved their marriage on the grounds that it was beyond redemption.

Since then, Emeka Ike has never been the same again. According to him, the most painful part of his life was watching the mother of his four children walk out of their marriage despite his plea to reconcile with her which fell on deaf ears.


He shares his pains, his anguish and regrets, vowing, however, to unravel the circumstances that led to the crashing of the marriage. He also believes that his wife was used to blackmail him by those who want him dead.

Are you saying that you never raised your hands on your ex wife?

Have you watched that one movie, where the wife was saying “everything is alright between me and my husband. He takes care of me and provides all my needs”. That was the situation between my wife and I. If I didn’t know I would have blamed her sudden change of character on my enemies. I love her so much. Why would she blackmail me by claiming that I was always beating her up when I didn’t. To avoid the disturbing mess, I had to abandon my businesses and house in Lagos and find a new life in Abuja.

Can you welcome her back into your life if she returns to you?
Accepting her back is not the problem, but let her confess and get herself back. I believe she’s under the influence of something.
How did you feel watching her walk out of her marriage ?
It’s the most painful part of my life. I cried for 24 hours every day for three to four years. I was just asking myself what is happening to me. You know, in blackmail, you will not know what is going on because somebody is playing the game. It was much later that I knew what was happening to me. I need to know the strength of these blackmailers because we have law in this country. And with the law, we will look at the issues pro-actively.

Meanwhile, when  Vanguard contacted Emma , she said, “The marriage is over. I have moved on with my life. I am not willing to talk about it again. His actions have not shown that he’s remorseful.