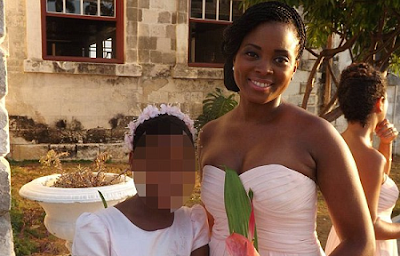 This is what I call the real 'our mumu don do', it's about time Nigerians fight for their rights all over the world. A Boston-Nigerian woman has filed a lawsuit demanding $3.4million plus interest, costs and attorney's fees after alleging that an American Airlines flight attendant destroyed her wedding dress as she was travelling to her ceremony.

Yewande Oteh claims she 'suffered severe diarrhea, dehydration and depressive symptoms' after a flight attendant went into an overhead bin and dumped red wine on her wedding dress in court papers filed by her mother in United States District Court, District of New Jersey.

She also claims that she remained 'physically and emotionally ill over the next week' and was unable to enjoy her Jamaican wedding, which took place back in August 2015.


The lawsuit is asking that Yewande, her lawyer husband Chidi, their then-nine-month-old son, her mother and attorney Yvette Sterling and her sister Dr. Kemi Fajolu each be compensated for the 'sustained and continued emotional and physical distress.'

Yewande filed the lawsuit against American Airlines and not the flight attendant 'Melanie Masters,' whose 'willful and wanton conduct has caused her a lifetime of damage,' reports claim.

American Airlines told DailyMail.com in a statement that they are reviewing the lawsuit.