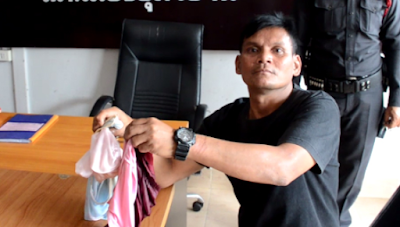 Security guards at a hospital in rural Udon Thani province today busted a Thai man stealing women’s panties which were hung out to dry in the sun. The guy claimed that they were a gift for his girlfriend.

Narin Prasertkaew, 38, was charged for theft. In his possession, police found four pairs of nylon panties in different colors, which belonged to the relative of a patient at Udon Thani Hospital, T News reported.

Narin told police that he had been laid off from a job at a gas station two months earlier and had been asking for food at the hospital. Today, however, he spotted the panties, which reminded him of his Laotian girlfriend.


Because his girlfriend’s panties have holes in them and he loves her very much, Narin took a risk and stole the panties so his girlfriend would have beautiful underwear.

“I stole them for my girlfriend. Her panties have holes in the butt area,” he told the police.