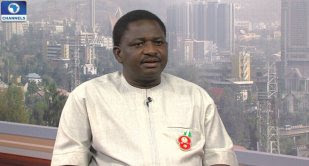 The Special Adviser to President Muhammadu Buhari on Media and Publicity, Femi Adesina, said that he has no idea who foots the medical bill of the president. Mr. Adesina said this when he appeared on a Channels Television talk show, Politics Today.

Mr. Buhari has been away on medical vacation since May 7. He has been in the United Kingdom for treatment of an undisclosed ailment.

During the interview, Mr. Adesina said details of how payments for Mr. Buhari’s hospital bills are effected do not matter. “Does it matter at this point?” he said in response to a question posed by the programme presenter.

“We need to know, he is our president. He is a public official. This shouldn’t be shrouded in secrecy,” the presenter, Seun Okinbaloye, replied him. “I do not know who is paying,” Mr. Adesina said, “but as a president, he has a right to be treated by the country.”


When asked specifically whether Nigeria is taking care of the bill, he said: “Most likely. I don’t not know for sure.”

Mr. Adesina, who was a part of the delegation that met Mr. Buhari during the weekend, explained that the president was “sharp, he was smart, he was lucid.”

“But like I said in the statement we issued, he will come when his doctors say ‘it’s time to go home’,” he argued.