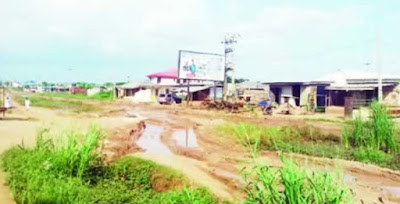 Tragedy struck in the Ogiro, Agbado area of Ogun State, after a fish seller, Farouk Adebowale, was shot dead by some gunmen suspected to be cult members.

Punch Metro learnt that Adebowale was hit by a stray bullet in the head while some cult members wanted to gun down a man who wanted to date their leader’s girlfriend.

Punch correspondent gathered that the alleged girlfriend, Yetunde Kamoru, and the suspected cult leader, Ganiyu Azeez, had gone for a party in a hotel in the Oyero area last Tuesday.

During the party, the unidentified man was alleged to have seduced Kamoru, which angered the boyfriend, Azeez. There was an argument between the men, which led to a fight.


Azeez and his friends were reported to have chased the lover boy to the Ogiro community, as the latter, who was also said to be a cult member, mobilised his gang.

The two groups allegedly exchanged gunfire which created tension in the community.

In the ensuing confusion, the victim, who was by the roadside with his goods, was hit by a bullet in the head.

He was said to have slumped and died on the spot.

A source said Azeez was later caught in a hotel with another girlfriend.

He said, “The main suspect, Azeez, went to a party with his girlfriend. On getting there, there was a brawl. He said a man was eyeing his girlfriend during a dance and that led to a fight. Azeez and his gang wanted to injure the man, but he fled.

“They trailed him outside and that led to a shootout between the two men and their gang members. Azeez’s cult members had wanted to shoot the lover boy, when the bullet hit the fish seller and he died.

“After the incident, residents said they knew the girl responsible for the fight. They reported to the police at the Agbado division and went to pick her at her house. She admitted to knowing about the fight and led the police to the boyfriend’s house.

“When they didn’t find him at home, she led them to a hotel where they found him in a room with another girl, called Yetunde. The two girls and the man were arrested and taken to the Agbado Police Station.”

When contacted, the state Police Public Relations Officer, Abimbola Oyeyemi, confirmed the death, adding that three suspects had been arrested.

He said the police had earlier received information that two rival cult groups, Eye and Eiye, planned to create mayhem in the area as part of their celebration of ‘8/8’.

He said, “On August 7, the police got information that some Aiye and Eiye cult members planned to attack the Oyero community to celebrate ‘8/8’, which was August 8.

“The Divisional Police Officer mobilised his men and started intense patrol of the area. It was while on patrol that he heard that some cult members had struck and fired somebody around the Transformer area of Ogiro.

“The DPO deployed some of his men in the area and two of the suspects were immediately arrested. When the DPO himself got there, the leader of the cult members was arrested.

Immediately he was sighted at the station, residents identified him. The suspects are Ganiyu Azeez, Yetunde Kamoru and Morufat Arojojoye.

“The state Commissioner of Police, Ahmed Iliyasu, has directed that they should be transferred to the Anti-kidnapping and Anti-cultism Unit of the State Criminal Investigation and Intelligence Department, Eleweran, for further investigation. The suspects are cooperating in the investigation and giving vital information on the incident.”