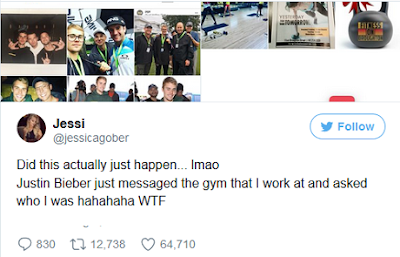 The “One Less Lonely Girl” crooner has been rebuffed in an embarrassingly public Twitter display, after he desperately DM’d a gym’s Instagram to try and get contact info for one of their pretty employees, Jessica Gober.

The former child star - seemingly turned internet creeper - DM’d the Georgia gym where Gober works after seeing a snap of her on its Instagram page.

The baffled receptionist however announced the weird move on twitter openly.

“Did this actually just happen… lmao Justin Bieber just messaged the gym that I work at and asked who I was hahahaha WTF,” she tweeted.


Gober also posted a screen-grab of the messages, which read: “Who is that girl,” followed by a heart emoji.

The fit blonde seemingly caught the 23-year-old’s eye after her Savanna employer, Fitness on Broughton, posted a Boomerang on the social media platform that showed her posing with an energy drink.

Unfortunately for the “Love Yourself” singer, Gober then tweeted out a photo collage of pictures of her snuggling up to her boyfriend.

“I’ve got everything I need right here,” she captioned the Tweet.

This isn’t the first woman Bieber has sought over Instagram.

She was later identified as Dutch-born Cindy Kimberly, 17, and signed with a modeling agency two months later. 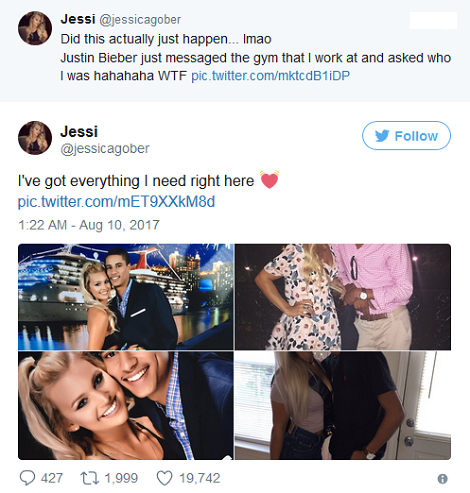