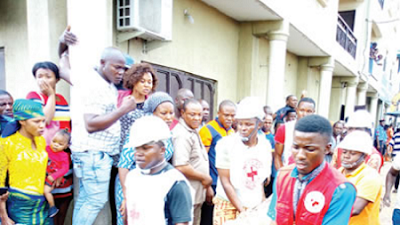 Tragedy struck in Owerri, the Imo state capital, on Sunday when a three-storeyed building collapsed, killing four people on the spot.

Three of the seven survivors, who were severely injured, were still in a coma as of the time of filing this report.

Among the deceased were a year and six months old girl, Osinachi Nnabu; a three-year-old boy, identified only as Amara, and two adults, whose identities could not be ascertained as of press time.

Osinachi’s parents and one Sunday Uzohor, survived with minor injuries and were discharged after first aid treatments.


But two serving members of the National Youth Service Corps and a 40-year-old man, identified simply as Mr. Anoruo, were unconscious as doctors at the police clinic, Owerri, battled to save their lives.

While the male corps member was identified as Chinedu, his female counterpart, whose name had yet to be ascertained, was said to be a Law graduate.

She was said to be undertaking her one year compulsory youth service in the state capital.

Punch Metro gathered that the two corps members were sleeping in the same room when the building collapsed in the dead of the night.

The rescue of the corps members took about eight hours, as they were reportedly buried in the rubble.

They still had signs of life when they were eventually rescued.

One of the survivors, Uzoha, said there was nothing that showed that danger was lurking, adding that it was by the grace of God that he survived.

He said, “I cannot explain how it all happened. My survival is a miracle and I thank God that I am still alive.”

Mr. Dominic Nnabu, the father of one of the dead babies, said his family had barely spent two months in the building when it collapsed.

“It is very painful that our 18 months old child, Osinachi, died in such a painful and agonising manner,” he added.

The state Commissioner of Police, Chris Ezike, told Punch Metro that preliminary investigation showed that the collapse was caused by the shoddy job done by the engineering team.

Ezike noted that the command would prosecute all those responsible for the disaster.