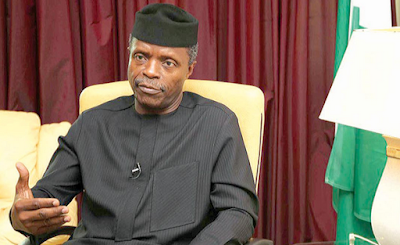 The main opposition party, the Peoples Democratic Party, says Acting President Yemi Osinbajo is not in charge of the country.

It said actions taken by the Acting President had shown that power was not handed over to him contrary to the claim by the Presidency that ailing President Muhammadu Buhari ceded power to him (Osinbajo) before leaving Nigeria for London on medical trip more than 90 days ago.

Spokesperson for the party, Dayo Adeyeye, who spoke with one of Punch correspondents on Sunday, wondered why the Acting President had refused to assign portfolios to the two ministers that were sworn in more than two weeks ago.

Adeyeye, who was a former minister of state for works, observed that the action of the Acting President indicated that he was just a figurehead.

“How do you explain a situation where two of the ministers who were sworn in after much pressure from the people and the National Assembly have not been assigned portfolios?

“He is not in charge. He is a mere figurehead and cannot do anything. The cabals are still in charge. That is why nothing is moving forward in this country.

“The two ministers are just idle. They have no offices, nowhere to resume to and nothing to do. What is the essence of their being sworn in then? They are ministers without portfolios.

“It is a constitutional breach on the side of the government because each state ought to have a minister each. Now, these two states had been without ministers for long and after you reluctantly appointed them, you refused to give them offices. “

The ministers are Prof. Stephen Ocheni from Kogi State and Mr. Suleiman Hassan from Gombe State.

Twenty days after Osinbajo administered the oath of office on the ministers, they have yet to be assigned portfolios.

Adeyeye said it was apparent that the All Progressives Congress was not ready to rule, adding that it won the 2015 presidential election in error.

He asked Nigerians to be patient, adding that 2019 would soon come when new elections would be held.