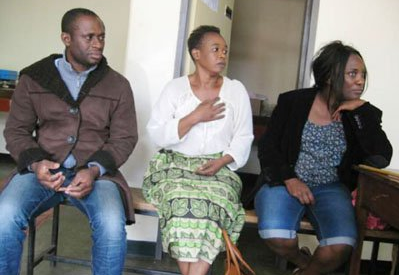 A 43-year-old Nigerian, Christian Osingwelen, has been arrested with two Malawian ladies for drug trafficking.

They were arrested at Kamuzu International Airport (KIA) in Lilongwe for illegal possession and importation of the dangerous drug called Ephedrin contrary to section 11 (a) Regulation 19 of Dangerous Drug Act.

“We are yet to finalise interrogating the three to where the drugs were coming from and who owns it,” said Chitonde.

Chitonde added that Mlenga received a phone call from an unknown person (name withheld) to collect a table from the airport, which had gone missing.

He said that USD2000 and additional MK700, 000.00 was paid as custom clearance for the table from MRA without knowing what was inside.

“Juma, a girl friend to the Nigerian man received a call from his friend to collect 1000 USD in town and give it to him at the airport without telling her the use of the said money.

“The Nigerian while accepting the statements from his friends is, however, denying ownership of both the table and the drug, despite giving Mlenga all the money to clear the table at MRA,” said Chitonde.

He further said MRA officers who handled the matter revealed to the police that Mlenga tried to bribe them with the said amount taking advantage that they were all women who needed to be helped saying if they felt they needed they should get it from the Nigerian.

“We are thanking MRA Officers for being professional when discharging their duties and tipping them about the three who they managed to get hold of them until police were informed.”