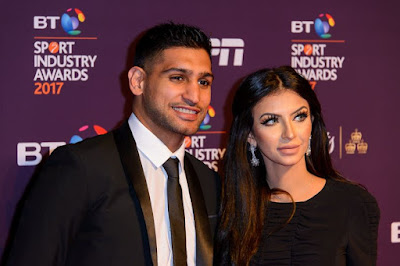 Amir Khan tried to leave wife Faryal Makhdoom for two years, it was claimed last night. The Olympic champion confirmed he was still splitting from his wife and mother of his daughter following a very public row over fellow boxer Anthony Joshua.

Friends reportedly claim the Bolton-born sportsman had been trying to leave his 26-year-old partner for years, claiming they were "living in hell".

But they claim he stayed after Faryal threatened to "ruin" the Muslim athlete by exposing the extent of his partying and womanising.


The Sun on Sunday quoted one pal as saying: "Every time an argument blew up, [Faryal] would tell him he was dreaming if he thought he could divorce her - it would be her divorcing him because she had so much dirt on him.

"She said divorce could destroy him and leave his reputation in tatters. He would lose his money, sponsors, his fan base, everything."

Faryal took to Twitter in the early hours of Friday morning to set the record straight over the cheating claims.

Khan later quoted Faryal and tweeted Joshua to confirm the very public spat had all been a misunderstanding.

Joshua accepted the apology but it later emerged he had threatened to sue Khan after being dragged into his bitter marriage break up.

Despite apparently burying the hatchet following the public spat, Khan confirmed he was still leaving Faryal because the relationship had become "unhealthy".

The 30-year-old wrote: "I still have made my decision to leave Faryal. It happens in life. The relationship was getting unhealthy. I wish her nothing but the best."