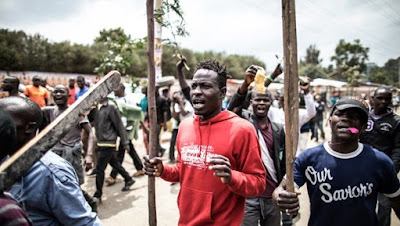 Three people, including a child, have been shot dead in Kenya in opposition protests which raged overnight into Saturday after the hotly disputed election victory of President Uhuru Kenyatta.

Demonstrations and running battles with police broke out in Nairobi slums after anger in opposition strongholds against an election that losing candidate Raila Odinga claims was massively rigged.

An AFP photographer saw the body of a nine-year-old boy whose family said he had been shot in the back while watching the protests from a fourth floor balcony in Mathare, a slum in the capital.

Attention is now focused on Odinga and his first reaction to Friday's official election results. He previously said the loss was a result of massive rigging of Tuesday's polls, which his party denounced as a "charade" and a "disaster".


Protests erupted in Odinga's strongholds in western Kisumu county and poor areas of Nairobi almost immediately after the election results were declared Friday, with gunshots ringing out and fires in the streets.

"We have one person killed and four others admitted in hospital with gunshot injuries," said Dr Ojwang Lusi, the regional health chief in western Kisumu county.