Return Home To Prove Your Worth, Bello Tasks Melaye

Return Home To Prove Your Worth, Bello Tasks Melaye 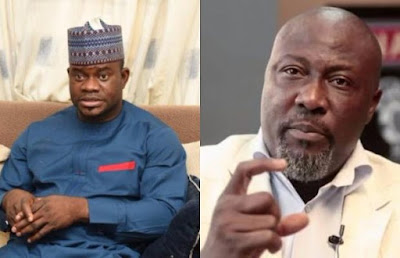 The Kogi state governor, Alhaji Yahaya Bello, yesterday challenged the leaders of the All Progressives Congress (APC) that fled the state to return home and build the party together with government.

Apparently referring to the leaders that include the state chairman of APC, Alhaji Hadi Ametuo, and members of the State Executive Council, the senator representing Kogi west senatorial district, Dino Melaye, the deputy governorship candidate of the party in the last governorship election, James Faleke, the governor said they should return home and prove their political worth.

The leaders, particularly the state chairman and majority of members of the executive council, have since the emergence of the governor fled the state to Abuja, which led to their being referred to as diaspora politicians.


Bello, who spoke at the stakeholders meeting of the party held at the party secretariat in Lokoja, preparatory to the state congress scheduled for Saturday, said every grassroots politician should return to the state to play politics.

He stated that he had never pursued anybody out of the state, saying the people should come back home to build the APC.

The governor said, “We must respect our party since the party is supreme, people that are on ground are here, those that are not here should come down home and participate in this state congress.”

“Every politician that is deeply rooted in the grassroots should come back home, we must join hands together to build a strong party. We are going to ensure that APC sweeps the next election in Kogi state.”

Bello however noted that the party in the state remained strong and united, saying efforts would be made to make it grow and be a preferred platform for electoral victory.