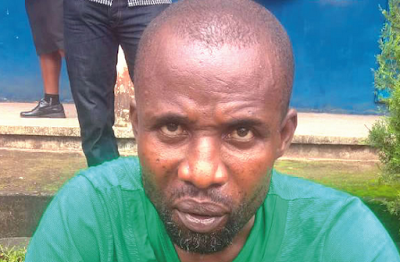 The Edo State Police Command said it has arrested an Osun-based herbalist, identified as one Usman Mohammed, for allegedly defrauding a woman of the sum of N6m.

The victim was said to have given him the money for ritual purposes in order to increase the amount to N12m. But Usman, who was paraded on Thursday in Benin, told Southern City News that his victim lost the money because she was looking for what she did not keep.

He, however, confirmed that he got half of the amount received from the woman as his share, while the remaining was shared among other members of his team.

Usman said, “I live in Osun State and I was arrested in Osun State. She (victim) is from Benin (Edo State). She patronised my office because I do ‘medicine’ for her. Before she requested for money ritual, she said I should do something to make her business to grow.

“She kept the bag in her room for three days and the day she opened it, there was no money inside. I told her she was the reason the money did not double. I got N3m but the other people ran away. She is looking for what she did not keep.”

The state Commissioner of Police, Mr. Haliru Gwandu, noted that suspects paraded would be charged to court at the end of investigations.