Loot Recovered So Far From Diezani, “A Tip Of The Iceberg” – Magu

Loot Recovered So Far From Diezani, “A Tip Of The Iceberg” – Magu 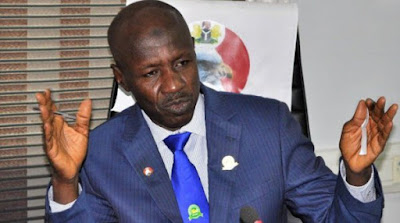 The Acting Chairman of the Economic and Financial Crimes Commission, EFCC, Ibrahim Magu, has described the gigantic loot recovered from embattled former Minister of Petroleum Resources, Diezani Alison-Madueke, as just the beginning.

“What we have recovered so far from Diezani is just the beginning,” Mr. Magu said while being quizzed by TVC news on Thursday. “Its just a tip of the iceberg.”

At least N47.2 billion and $487.5 million in cash and properties has been traced to the former oil minister, Mrs. Alison-Madueke by the anti-graft agency.


“This followed painstaking investigations by operatives of the EFCC,” two staff of the anti-graft agency wrote in an article sent to Premium Times.

The former minister is also being investigated for corruption and money laundering in the United States and the United Kingdom.

Mr. Magu said the EFCC is working with other agencies around the world to unearth more loots linked to Mrs. Alison-Madueke.

“We are moving in and we will recover every loot linked to her. We will get other people she’s work with,” Mr. Magu said.

Mr. Magu said his greatest challenge since he took up the tough job to man the anti-graft squad is that corruption is fighting back.