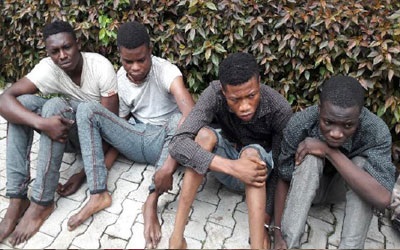 No doubt the sex romp by the students of both Adeyemi College of Education, Ondo city and Rufus Giwa Polytechnic, Owo, in Ondo State and a barber was a well planned script.

The barber, who is also a friend to the lover boy, Vanguard, gathered, was involved in order to make his room available as the slaughter slab on the day of the operation.

They also thought it best to record their escapade with the 18-year-old lady which they intended to use after as a tool to blackmail her if eventually she decided to go to either the college authorities or the law enforcement agencies.

Solomon Timilehin is the one dating the victim and the others ate deciding to have a “taste after he opened the gate for them.” Other suspected rapists include Olagbaju Tobi, Adetuyi Olakunle, Adeyemi Adebisi and Eric Nwage.


Infact an unconfirmed source said that the suspects used the video recording as a bargaining tool to have sex with the victim twice before she opened up.

Police reports had it that after they raped her they abandoned her to go with a threat that they will use charms on her if she ever reveals the incident to anyone.

Vanguard gathered that the boyfriend who had been having a misunderstanding with the victim for dumping him for another student decided to teach her the lesson of her life.

Findings showed that the two lovers have been dating for over six months and the girl had not yielded to his sexual advances.

Timilehin was said to have been infuriated when he saw another lover boy’s name registered on the victim’s telephone and reported to his friends who promised to help him out of his predicament by teaching the “cheat” the lesson of her life.

The friends later agreed that the treatment the victim deserved was for the five of them to mess her up by taking turns to rape her.

One of them, according to a police detective, suggested that he would pretend to be a peacemaker wanting to settle the misunderstanding between the two estranged lovers by inviting her to a neutral venue outside the campus.

The victim who had no premonition of their devilish plan blindly walked into it and they took turns to rape her at Road17, Funbi Fagun Housing Estate, Ondo town.

Vanguard gathered that it was the supposed peacemaker and the estranged boyfriend that first showed up at the venue while the other three who were lurking around later joined in the show of shame.

A police detective confided in Vanguard that the suspects while raping the victim threatened to stab her to death with a knife if she raised the alarm to attract the neighbours’ attention.

The five friends successfully had their turns and chased the victim out of the room with a warning that it would be in her interest to keep her mouth shut or she would live to regret it if she reported to the school authorities or police.

Vanguard learned that out of fear that the recording may go viral, the victim remained silent though it was painful taking the incident as her cross. The friend, it was gathered, hinted the Dean of the student Affairs who in turn notified the college security guards. An ambush was laid for the suspects and they were picked one after the other.

The lover boy was the first to be picked and subsequently fingered his other accomplices. They were later taken to the Ondo Divisional Police station and thereafter transferred to the state police headquarters in Akure.

Speaking with Vanguard when the state police command paraded the suspected rapists alongside 15 other suspected cultists, the suspects except the victim’s boyfriend denied that she was raped but consented to their demand at a fee.

One of the suspects, Adetuyi Olakunle, who confessed using his mobile telephone to record the gang rape said they decided to do so “to make sure the incident was not reported to the school authorities or law enforcement agencies”. Olakunle said: “I recorded the video so that the girl will not be able to tell anyone.

I was afraid that she might report to school authorities if the scene was not recorded.” The boyfriend Timilehim, a 200 level Sociology student, said he only invited “her to his friend’s house so that they could help us settle our misunderstanding.”

He said: “She called me when I was in the classroom that she wanted to see me; I have not seen her for a while. I took her to the house of one of my friends so that we can settle our differences. “Eventually, when we were in the room, one of my friends called her and was doing a lot of things to her. Later we agreed to have ‘fun’.

As we were having fun, one of my friends came in, he had sex with her. The second one came, later the third and fourth came to make love to her. I was not feeling fine when they were having sex with her.” Also, another suspect Nwage said: “it was Tobi that promised the girl N20,000 before she consented to having sexual relationship with us.