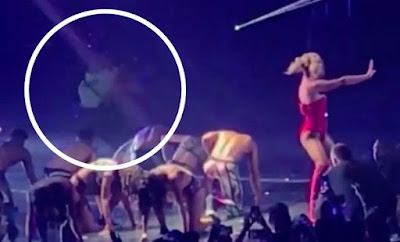 Britney Spears clung to her security in terror after being rushed off stage when a man invaded her performance in Las Vegas.

The princess of pop looked visibly scared when she was escorted away during her last song at the sold-out Piece of Me show.

During her performance of 'Till The World Ends', a man hopped on stage and sprinted towards the singer. Fan-footage shows one of Britney's security guards immediately blocking the man's attempt to get near her.

Britney - wearing a red leotard and leather boots - is unaware of the incident unfolding behind her.


She is then surrounded by a group of security guards as the man is thrown to the ground.

"Is something okay? What's going on? Who's hurt?" Britney, 35, said amongst the commotion before being ushered off.

Jason Blackhurst, from Melbourne, who was at the Planet Hollywood venue, filmed the show-stopping moment.

He claimed Britney seemed "weak at the knees" as security scrambled to protect her from the intruder.

He told 9news.com.au : "It was heading towards the end of the show and she was wrapping up the last song and somebody got onto the stage and one of the security guards tackled them.

“Britney was rushed off the stage as security wrestled with the guy, when they moved him off the stage everybody started chanting ‘Britney, Britney’.”

The man was eventually handcuffed and detained, with Britney returning to finish her last song.