Fayose Is A Depressed Loudmouth Suffering From ‘Mouth Diarrhoea’ - Kashamu 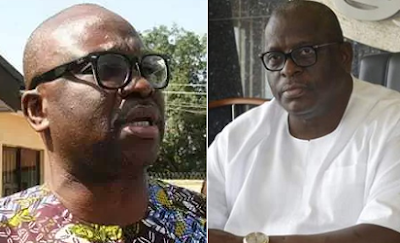 He said this at the party’s South-West stakeholders’ meeting held in Ibadan Oyo state capital.

However, it was reported by ‘Thecable’ that Fayose raised a motion for his expulsion, arguing that him (Buruji Kashamu) was responsible for the challenges confronting the party in the south-west.

According to Buruji, “The truth is: besides the illegality of their so-called resolutions, I do not need the association of Fayose and his cohorts. It is Fayose and his gang that should be avoided by our people.


“He has since been declared a persona non grata and unfit among reasonable and right-thinking members of the society. “Ordinarily, I would not have dignified Fayose with a response since everybody knows him as a depressed loudmouth who is suffering from what the legendary Chief Gani Fawehinmi would describe as ‘mouth diarrhoea’.

He is nothing but an opportunist and a political scavenger whose night time will soon come.

“Fayose wants to be the ‘alpha and omega’ of the PDP in the south-west, whether by hook or crook. But he forgets that leadership is not compelled; it is earned.

And he does not have what it takes to lead the PDP even in Ekiti state, let alone the south-west. For now, he can only aspire and pretend to the leadership. In a couple of months, the Pharaoh that we see today, we shall him no more. He finally said”