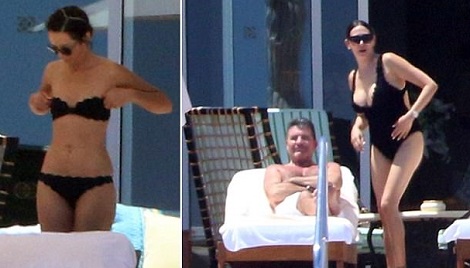 His relationship with Lauren Silverman came to light in 2013 after pictures of them kissing on a yacht emerged.

And Simon Cowell proved he was still smitten with the stunning brunette as he lounged around a pool during their Los Cabos, Mexican getaway, where in an unconventional move, his former flame Terri Seymour was also present.

The music mogul, 57, couldn't look happier as he topped up his tan with his gorgeous other half, 39, who put on a seriously busty display, and his ex-girlfriend, who he broke up with nine years ago.

Simon went shirtless and donned a tiny pair of white swim shorts as he reclined on the sun-lounger, while the two beauties got comfortable on the loungers beside him.


His girlfriend Lauren kept close by and looked incredibly sexy in a perilously plunging one-piece which served to accentuate her sensational curves.

While many couples wouldn't normally opt for their exes to be on a romantic trip with them, Simon and Lauren didn't seem to mind as they kept up the high-spirited demeanour with Terri.

Terri and Simon were an item for eight years before their split, with the music mogul rumoured to have given her a £6million 'parting gift'.

He then went on to become engaged to Afghan-born make-up artist Mezhgan Hussainy in 2010, but they split in February 2012 and the following year he began a romance with Lauren. 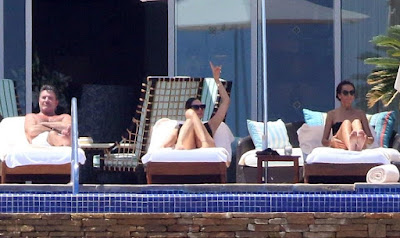 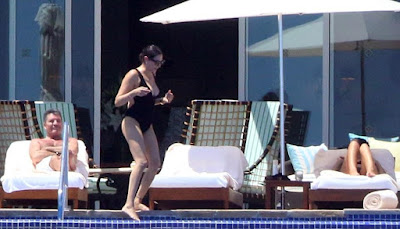