Amir Khan Set To Move On, Vows To Get Back On Top In The Boxing World .

Amir Khan Set To Move On, Vows To Get Back On Top In The Boxing World . 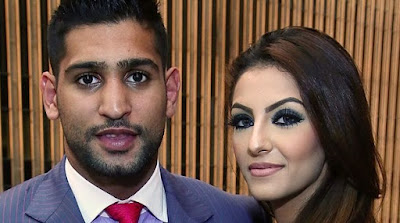 Boxer Amir Khan has vowed to put his marriage breakdown behind him as he planned a return to America. The former world champion posted an image of himself in Dubai telling his 2.1 million Twitter followers: 'No pressure. Just relax and watch it happen."

Earlier, he announced his plans to set off for San Francisco this month to start training.

He added: "Putting everything behind me and moving forward. Get back on top with big fights."

The star was left heartbroken after announcing his split from his wife Faryal Makhdoom. Just hours after accusing Faryal of being involved with world heavyweight champ Anthony Joshua, 27, Khan said: "I haven't slept all night." Lol, poor couple