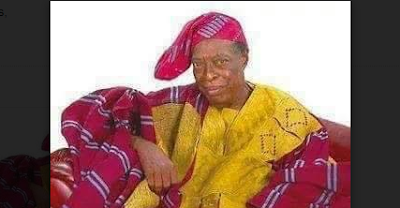 The Ooni of Ife, His Imperial Majesty, Ooni Adeyeye Enitan Ogunwusi, Ojaja II has described the late renowned poet Adebayo Faleti as a great ambassador of Yoruba Culture that will forever remain in the hearts of all the members of Yoruba race both at home and in diaspora.

Ooni Ogunwusi stated this in a statement released by his Director of Media and Public Affairs, Comrade Moses Olafare on Saturday saying the late multitalented communicator had spent almost all his life serving the Yoruba race in various areas​ of cultural development for which he would be forever remembered.

"Chief Adebayo Faleti will certainly continue to live in the hearts of all the descendants of Oduduwa in appreciation of him as a colossal blessing to our race as a great ambassador who gave all his God-given talents for the promotion and sustainability of Yoruba culture and traditions right from the young age of 19years when he first established a Yoruba theater group known as Oyo Operatic Society."


The Spiritual Leader of Yoruba race worldwide in the statement admonished the South West governments to immortalize him with befitting Arts institutions with a view to eternally​ making him a reference point to the youths whom he also charged to always find the great playwright and famous actor worthy of emulations in the various areas of their chosen careers especially in Arts.

"You will find him relevant  virtually​ in all segments of Arts and culture. That why the governments of the South West must immortalize him.
He is poet, he is a singer, he is a veteran actor, a writer, a broadcaster, a media manager, a teacher and rare promoter of Yoruba Cultural values that can be productively​ tapped by our youths who must always find him worthy of emulations". Ooni said.

The African foremost monarch prayed for the soul of the late TV exponent and a pioneer of the first television station in Africa, Western Nigeria Television (WNTV) who later rose to become the General Manager of Broadcasting Corporation of Oyo State(BCOS) Ibadan and all members of his entire family with whom he had closely related for decades.