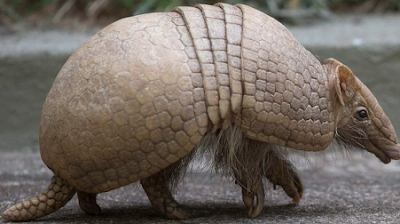 A Texas man was wounded after he fired a gun at an armadillo in his yard and the bullet ricocheted back to hit him in his face, the county sheriff said yesterday.

Cass County Sheriff Larry Rowe said the man, who was not identified, went outside his home in Marietta, Texas, at around 3 a.m. local time Thursday morning. He spotted the armadillo on his property and opened fire.

"His wife was in the house. He went outside and took his .38 revolver and shot three times at the armadillo," Rowe said.

The animal's hard shell deflected at least one of three bullets, which then struck the man's jaw, he said.


The man was airlifted to a nearby hospital, where his jaw was wired shut, according to Rowe.

The status of the animal is unknown.

"We didn't find the armadillo," the sheriff said.