When Caitlyn Jenner Made A Trump Blunder

When Caitlyn Jenner Made A Trump Blunder 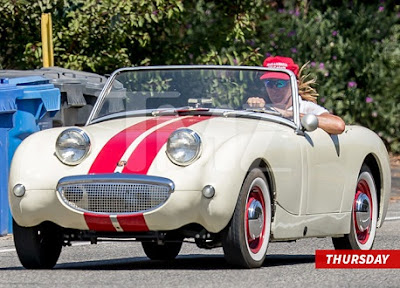 Caitlyn Jenner did not wear a "Make America Great Again" hat Thursday as a show of support for Donald Trump ... it was a mistake tied to golf, a convertible, Starbucks and a purse.

Caitlyn tells TMZ she drove from her Malibu home to Sherwood Country Club in Thousand Oaks, CA, in a 1960 Austin-Healey convertible. Before leaving home she realized she needed a hat, something better than a golf visor to protect her hair. So she rummaged through the 10 hats in her closet and grabbed one without looking at the stitching.

She says when she got to the club she threw the hat on the floor of the car, and then spent an hour or so hitting some balls and left. When she got to the car she grabbed the hat and saw the inscription, and realized what she had done.


She tells TMZ she was horrified because she now detests Trump after he tweeted about the military transgender ban. Caitlyn says, "What he's doing to our community is absolutely f***ing awful."

But Caitlyn had a dilemma on her hands ... wear the hat home or screw up her 'do. She chose the former, thinking no one was going to see her. She wanted to stop at a Starbucks for a latte, but exercised caution, and a mile from the coffee joint she switched to the golf visor and walked inside.

When Caitlyn left, she switched again, deciding to wear the Trump hat home. She got halfway to her property when she realized she left her purse at Starbucks, which contained, among other things, her cellphone. Caitlyn panicked and raced back to retrieve her purse, forgetting she was wearing the hat.

She ran inside, grabbed the purse and drove home. At some point she realized she still had the hat on but thought she could make it back undetected. She was wrong. Caitlyn says a photog snapped the pic somewhere between Starbucks and her Malibu home.

As for what to do with the hat, she's thinking of signing it and auctioning it off and giving the proceeds to a transgender cause. On the other hand, she might just rip it up or burn it.

Caitlyn says, "I apologize to all of the trans community. I made a mistake. I will never do it again and I'm getting rid of the hat."