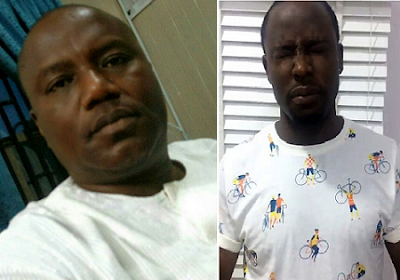 Lol, poor Mercy, They keep dragging her in. So recently a film maker, Lege Miami on instagram called out Lanre Gentry, crying furiously in an instagram video and telling the world to help him beg Mercy Aigbe's estranged husband claiming he has been threatening him with death messages. The video went viral and some even called Lanre Gentry out. Fast forward now, Lanre got the police to invite him, he was asked to write a statement, they argued, and the Police settled it.

Now both Lanre and Lege have brought their cases to Saturday Beats, okay let's say Saturday Beats reached out to them and they clearly had two DIFFERENT stories. What we picked from Mr Gentry's tales is that, MERCY AIGBE IS HIS WIFE AND SHE REMAINS HIS WIFE. They have also never had an argument except on the matter of food. He also said, Mercy has never cheated on him. Continue below to read both explosives from both men. Poor Mercy, they need to let her be. She already got a new apartment and she has been shining like the STARS, hehehe.


Gentry said, “The State Criminal Investigation Department picked the young man up and arrested him yesterday. I made a complaint against him for defaming my name and men of the Nigeria police went to pick him up because I do not know him. I have never even seen him before yesterday. They later released him yesterday after a lot of people trooped in to beg on his behalf. However, before he was released, he was asked to write an undertaking that he would never try such a thing again. I don’t know him from Adam. My wife is a very gentle person and she remains my wife. She is not a troublesome person neither is she promiscuous. I have never accused my wife of cheating on me and we have never had a fight over her faithfulness to our marriage. The only little misunderstanding we had was over the issue that I gave her money to cook for me but she did not do so. That was what caused our misunderstanding. The guy in question is just looking for cheap popularity and it led to his arrest. He has already written an undertaking to refrain from tarnishing my image. Initially, they wanted to lock him up and charge him to court for defamation of character but people really pleaded on his behalf so I had to be lenient and asked them to let him go after he wrote the undertaking. I have no quarrels with my wife.”

In his words, Lege Miami said that Gentry was a “liar” and he had once accused him (Lege Miami) of sleeping with his wife last year in the presence of an actress and his manager. He further provided details of what he claimed transpired at the police station.

“A policeman called me on Tuesday that I should come to the SCID that someone made a complaint against me that I was tarnishing his image. When I got to the station, I saw Lanre Gentry and he acted as if he did not know me. When he was feigning ignorance, I had to remind him that the first time he threatened my life was in the presence of an actress, Ireti Osayemi and my manager. In the presence of the police, I told him that the first time he threatened my life was last year; then this year, he resorted to sending me threat messages via Instagram. He claimed that I always call his wife at odd hours and I am sleeping with Mercy Aigbe. All these allegations are lies. When he first accused me of sleeping with his wife on set, I called Mercy Aigbe some days later to report him but she pleaded with me and asked me to keep my calm.  He sent the message to me last week Sunday asking me to leave his wife alone again or he would ruin my life. He used a fake account to threaten me to leave his wife alone or else I would die. I went to report the case at Lagos State Police Command, GRA, Ikeja. When I honoured their invitation at SCID on Tuesday, Lanre’s story began to vary and after showing them evidence, the policemen told me to apologise to him but I refused because I was not wrong. They eventually asked me to write a statement and as I was writing what exactly happened, they wanted to teleguide my writing but I did not listen to them. That is what happened. As I speak, different unknown people have called me asking me to remove the Instagram post and also go and apologise but I have refused to do so because I have not offended him. Mercy Aigbe is just my colleague and we do not have an amorous relationship. I have never even called her at midnight as her husband claimed,” he said.