Amir’s Family Get In Between Couple Riff, Says Faryal Is A CHEATER, EVIL & GREEDY

Amir’s Family Get In Between Couple Riff, Says Faryal Is A CHEATER, EVIL & GREEDY 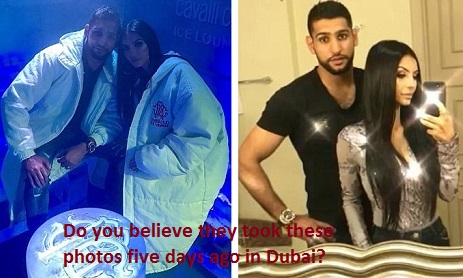 Lol, so after Amir Khan and his now estranged wife were involved in a twitter row this afternoon, his family have decided to join in, lol. I pity them, cause the words on Faryal are so brutal they will all RUN!

'Amir and Faryal have split up. It's over. There have been problems in the relationship for a long time and they were headed for a separation. It's the best outcome.

Another Khan family source said; 'Faryal is evil. She took control of Amir and drove him to the extent where he has suffered depression.


'Amir was almost held hostage by in laws and was given 'either with us or against us' situation to decide between his family and in laws.

'That's tragic. It was clear from very early on that Faryal is interested in Amir's money and fame and we told Amir so that she's a bad choice.

'We all make mistakes. It's good Amir has reached to the conclusive fact that she's a cheater, selfish and greedy. This was bound to happen.'

But within minutes of her claims of a hack, Khan had snapchatted himself to confirm the split was true, and no one had been hacked.

He said: 'Everything you saw on social media it is real. Me and Farrah have decided to move on and walk away.

'Nothing has been hacked. We have to move forward it’s not healthy for any of us. I wish her all the best in the future.