Soldier Kills Motorcyclist For Shunning Him

Soldier Kills Motorcyclist For Shunning Him 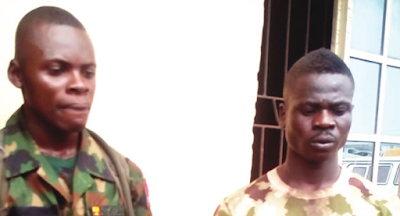 A power-drunk soldier, Abiola Odedeji, has brought sorrow to the family of an okada rider (commercial motorcyclist), a resident of Agbado, Ogun State.

Odedeji allegedly stabbed the victim, Niyi James, aka Emi-Ero, in different parts of the body.

Punch Metro learnt that the killer soldier had visited his girlfriend, Amada David, at Agbado Junction around 3.30pm last Thursday in company with his colleague, Damilare Oni.

The soldiers went to the area, close to the Agbado Police Station, on a power bike. It was gathered that after a short discussion, Odedeji and his girlfriend decided to go out on the motorbike.


He was said to have stopped Niyi, who shuttled between the junction and Agbado Crossing, to take Oni to Ijaiye, Lagos State.

An eyewitness, who gave his name only as Akinjobi, told Punch correspondent that the 36-year-old native of Ikogosi, Ekiti State, declined on the grounds that he did not have a ticket to operate in the Ijaiye area.

Akinjobi said, “The soldier (Odedeji) was angry that the okada rider said no to a military man and started flogging him with a horsewhip. Suddenly, he brought out a long knife and stabbed the man on the thigh.

“He also stabbed him on the waist and stomach. He was so confident that he robbed off the bloodstains on the knife on the man’s head. He boasted that he had killed many people. He and his colleague escaped on the power bike, while the lady took another motorcycle. We quickly alerted the police.”

Punch correspondent learnt that a team of policemen, led by the Agbado Divisional Police Officer, CSP Sunday Omonijo, immediately went after the suspects.

A source said David was apprehended on Clem Road, Ijaiye, while policemen chased the soldiers to Mosalasi bus stop.

He said, “Odedeji stabbed one of the policemen on the arm, but they eventually arrested him and his colleague. He is part of the troops deployed in Borno State to fight Boko Haram. His colleague is serving in Bauchi State. They are both from Osun State. The okada rider died at the Ifako-Ijaiye General Hospital.”

The source explained that the girlfriend had invited Odedeji to intervene in a N25,000 business transaction involving her and a customer.

“The lady said she bought a container from somebody, but the person had not delivered it to her after paying N25,000. She wanted to use the soldiers to intimidate the person to refund the money,” the source added.

The deceased’s elder brother, Kolawole James, said the family had lost a breadwinner, demanding that Niyi’s killer should be brought to justice.

He said, “I brought him from our village about eight years ago. At a point, I relocated to Akure, Ondo State. I was called on the telephone on Thursday that he was involved in an accident and that he was in a critical condition.

“On getting to where he lived in Agbado Crossing on Friday, I was directed to the general hospital. It was at the hospital I learnt that he was stabbed by a soldier. He was dead when I got there.

“He was the most gentle child in the family. I never believed this could happen to him. He was single. The soldier that killed him must be prosecuted.”

The Ogun State Police Public Relations Officer, ASP Abimbola Oyeyemi, who confirmed the incident, said the suspects would be charged to court after investigations had been concluded.