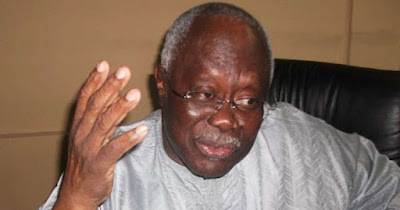 George said this during an interview with Punch correspondent on Friday. He told Fayose that God had already fought for him by allowing him to return as governor of Ekiti eight years after his impeachment.

George said he was aware that his imprisonment for financial impropriety was “nothing but political persecution” and that was why he was later exonerated by the Supreme Court.

He, however, said he never had the intention of becoming the Chairman of the PDP Board of Trustees and therefore doubted if that was the reason for his incarceration.


George said, “My advice to my younger brother in Ekiti State is that it is time for him to forgive and forget and let sleeping dogs lie. He was impeached but God reinstated him as governor after eight years. What more can a man ask for?

“He should forgive and forget. We should not wash our dirty linen in public.

“I have always said that my imprisonment was nothing but persecution and I have been vindicated by the highest court in the land. I never wanted to become BoT Chairman so I doubt if that was the reason why I was treated that way. The BoT chairman is chosen from among the elders within the party and not by other organs.”