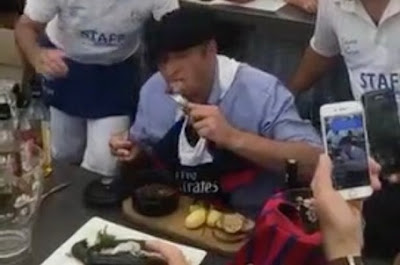 With PSG hammering Barca 4-0 in the first leg of their last-16 encounter, Charles Dayot of Mont-de-Marsan — a commune in southwestern France — took to Facebook to announce he would gobble down the unappetising dish if the Ligue 1 giants were dumped out.

But Dayot was left with no choice other than to swallow his pride along with a cooked rodent when Barcelona completed the unlikeliest of victories.

Although the Spanish giants led the second leg 2-0 at half-time, the bullish mayor was far from ratty as PSG appeared likely to score at least once at the Nou Camp.


A 50th-minute Lionel Messi penalty left him biting his fingernails but Edison Cavani netted just after the hour mark to leave the Spanish giants facing an uphill battle once again to turn the tie in their favour.

However, Messi and Co refused to throw in the towel and two late goals from Neymar — one a penalty — were followed by a last-gasp strike from Sergi Roberto.

With Barca winning 6-1 on the night and 6-5 on aggregate, Dayot was left facing the horrifying fact that he would have to munch on vermin.

And although it took him a while to stay true to his promise considering the tie was decided in March, he donned a PSG shirt as a napkin to tuck into is rat dish on Sunday.


He even went as far as to suggest the unusual cuisine actually tasted like rabbit — proving there really is no accounting for taste.