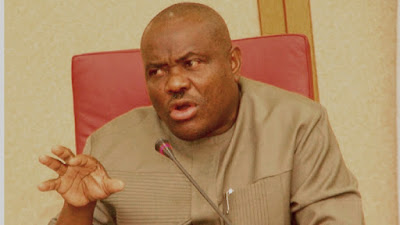 The Rivers State Governor, Chief Nyesom Wike, said on Tuesday that the bad governance of the All Progressives Congress had left Nigeria terribly divided.

Wike, who stated that the country needed people who would promote peace through quality leadership, added that Nigeria was currently bedevilled by myriad of problems.

Wike said that Nigerians were deceived into voting for the APC, pointing out that in 2019, no Nigerian would be deceived by the empty promises of the party.


“Nigeria is divided because of the APC leadership style. Wherever you go today in this country, there is one problem or the other. Is that how Nigerians want it? Certainly not! We need people who will promote peace through quality leadership.

“The change they said they are bringing is fake change. No person resident in Rivers State and sees what we are suffering from the APC Federal Government will ever support the APC,” he added.

Wike said the poor nature of the community roads in the heart of Port Harcourt had brought to the fore the failure of the immediate past administration.

The governor urged the contractor handling the road reconstruction projects to carry the people of the host communities along, through sub-contracts and employment opportunities.

On the flooding of many parts of the state, the governor said his administration would take steps to stop recurrence.

He appealed to residents to desist from building houses on waterways, noting that resolving the flood challenge would require everyone to work in unison.

The representative of the CCECC, Mr. Robinson Ndiokho, assured the governor that the company would construct the roads in line with the approved specifications.

But reacting to the governor’s claim, the state APC Publicity Secretary, Mr. Chris Finebone, said Wike was still basking in the euphoria of the recent Supreme Court judgement that came his way.

He explained that at the right time, very few of the likes of Wike and other PDP leaders would have the presence of mind to speak to Nigerians and at the same time answer the mountain of corruption cases in various courts.

Finebone said, “The APC will list over 60 PDP leaders with their long list of alleged plundering of the nation’s resources that happened over the years, especially during the Jonathan presidency. Nigerians and the world will see these people for who they are.

“The present bravado you see in Wike and other PDP leaders will pale into insignificance as 2019 approaches. Their sins will seal their lips before Nigerians. They will be free, but unable to campaign. The wrong they have done will go after them.”