BEHOLD! The Man Who Carried Out The Latest Abuja Bombing

BEHOLD! The Man Who Carried Out The Latest Abuja Bombing 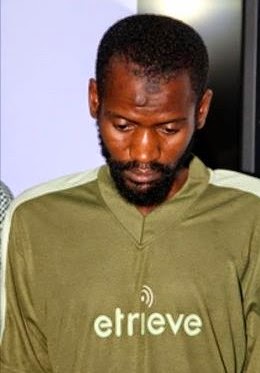 The Department of State Security (DSS) paraded five men in Abuja on Monday it said have confessed to being involved in the bombing of the popular El-Rufai Motor Park in the Nyanya area of Abuja on April 14.

The men: Ahmad Rufai Abubakar, Muhammad Sani,Adamu Yusufu, Yau Saidu and Anas Isah, were referred to in a paper handed to reporters after the parade as "suspected masterminds" of the attacks. 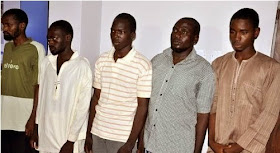 According to a police information handed out to reporters, a Boko Haram leader called Rufai Abubakar Tsiga, who is currently at large, was "a mastermind of the bombing incident. " The police said that Tsiga was actively aided by a co-mastermind, Aminu Sadiq Ogwuche, also at large, a student of Arabic Language at the International University of Africa, Sudan.

The SSS Write-Up: Recall that 14th April 2014, at El -Rufai Motor Park Nyanya, a bomb explosion occurred which resulted in the death of 74 people, leaving several other injured.

As investigation was ongoing another bomb blast occurred on 1st May, 2014. Following these incidents and in line with the Security Forces commitment to bring to book perpetrators of evil in our society, a thorough investigation was initiated which led to the arrest of some suspected masterminds of the attacks.

It is unclear why they chose a public parade rather than a court to commence prosecution of the suspects.