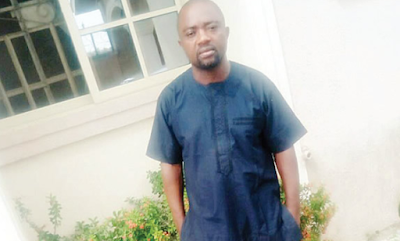 Punch Metro learnt that the operatives were exchanging gunfire with some gunmen who were making away with the 42-year-old in his black Toyota Avensis, when he was hit by bullets.

The cops reportedly recovered the bullet-ridden car, which they took to the State Criminal Investigation and Intelligence Department, Calabar.

They also handed over Emmanuel’s corpse to men of the Special Anti-Robbery Squad, saying that he was among the robbers that died during the gun battle. Emmanuel’s widow, Esther, who petitioned the Inspector-General of Police and the National Human Rights Commission over the incident, said the policemen lied against her husband to cover up their misdeeds.


Esther, a Deputy Route Commander of the Federal Road Safety Corps in Akwa Ibom State, explained that the cops did not follow the rule of engagement and deliberately ignored the ‘Basic Principles on Use of Force and Firearms, and Force Order on Firearms under Proportionality, Legality, Accountability and Necessity.’

During a telephone interview with one of Punch correspondents, the mother of four noted that the incident happened on July 12, 2017, at about 9pm, adding that Emmanuel had gone for a church programme on the day.

She said from church, he went to drop an uncle in the Lemna area of the Calabar metropolis when he was abducted by gunmen.

She said, “We were all living together in Calabar until I was deployed in Uyo, Akwa Ibom State, about a month ago. On the day of the incident, we still spoke. He told me that he was returning from church, but was about dropping off his uncle at Lemna Junction, Calabar. He said he would be returning home immediately afterwards.

“At about 2.30am the following day, my housemaid called and said my husband had not come home. I became worried and started dialling his number, which rang out. I called about seven times without any response. I called his uncle as well, but he didn’t pick the call.

“I also called one of his best friends, who claimed not to have seen him. I kept calling till about 7am when the uncle finally responded and said he had also been trying to reach him without any success.”

She said after efforts to know Emmanuel’s whereabouts were abortive, she urged the uncle to go to the nearest police station to lodge a report of a missing person.

The uncle, after some hesitations due to the 24-hour condition for such a report, later went to the SCIID, Diamond Hill, Calabar, where he found the victim’s car.

“He said he asked them what happened and they told him that policemen attached to Operation Skolombo brought the car with a corpse who they claimed was an armed robber. They told him that the policemen found a locally-made pistol in his car.

“When I got the information, I took permission from office to return home. On my way, I got a call from a lady that knows me. She said my sister-in-law called her to tell her that my husband was missing.

“She said she was at the junction on the night of the incident and was about to buy fish when she saw four gunmen dash towards my husband.

“She said they asked him to enter into his car and he told them that they should leave him alone, that he was just coming from the church. They hit him with their gun in the head and shot into the air twice. They then forced him into the car.

“A motorcycle rider, who saw what had happened, rode ahead of the robbers to Tinapa Junction, where operatives of Operation Skolombo have a pin-down point. He told them what he had just witnessed and said the gunmen were coming in their direction in a black car with hazard light on,” she added.

Punch Metro learnt that the policemen engaged the gunmen in a shootout during which the victim was killed.

Esther said the state Commissioner of Police, Hafiz Inuwa, told her that it was unfortunate that police bullets killed her husband.

“Since then, we have not heard anything from them. I don’t know whether they have questioned the operatives to know what happened. And unfortunately, none of the people that abducted my husband was arrested. They labelled him an armed robber and took his corpse to a teaching hospital to embalm him without the knowledge of family members,” she said.

Punch correspondent was told that Emmanuel, who was vying for the Chairmanship of Ikom Local Government Area under the platform of the PDP, was also a contractor.

When contacted, the state Police Public Relations Officer, Irene Ugbo, confirmed the incident, but said it was not the police that killed Emmanuel.

She said, “What happened was that he was abducted by some group of persons; whether they were armed robbers or kidnappers, nobody knows. People saw when he was beaten up and pushed into his car and driven away.

“When the policemen saw the body of the man in that car, they alleged that he was an armed robber, not knowing that the man that was inside the car was the victim. What we saw in the writing was titled, ‘Armed Robbery Suspect’ but after investigation, we realised that he was not an armed robber.”