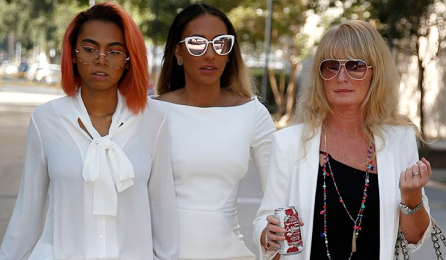 Mel B ’s mum was barred from flying to Los Angeles to be at the troubled star’s side. Andrea Brown wanted to support the former Spice Girl as she goes through her increasingly bitter divorce from hubby Stephen Belafonte .

But she said she was told the American ­embassy would not allow her to travel as her paperwork was invalid.

The blow came a week after she ­revealed she was thankful Mel was alive after “10 years of worry”.

Devastated Andrea tweeted: “Tears at what Melanie’s going through and the embassy wouldn’t let me fly out.”


She had earlier revealed the travel problem by saying: “Anyone going 2 USA 4 3month make sure it’s 90days I stayed 91 10yrs ago so my esta [electronic visa application] invalid.”

Her frustration came as Mel, 42, was pictured with daughter Phoenix Chi, 18, ­outside court on Friday as she sought a restraining ­order against her former nanny.

Mel’s lawyer has claimed Lorraine Gilles, 25, stole £230,858 from her and is “conspiring” with Belafonte, 42, by threatening to release sex tapes.

Gilles and her legal team have denied all allegations and claim she has just been caught in the middle of the celebrity couple’s acrimonious divorce. Mel’s legal team argued that “sexual and salacious” allegations from Gilles could be harmful to her younger daughters Madison, six, and Angel, 10, if such videos were broadcast on TV and the internet.