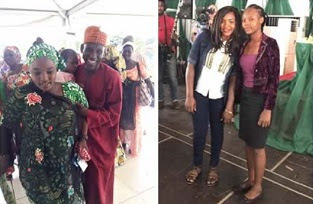 The Chibok Secondary School girls, who were released by the Boko Haram insurgents in May 2017, have appealed to the Federal Government to devote attention to the release of other abducted non-schoolgirls who are still under the captivity of the dreaded terrorists.

The girls were released after the Federal Government’s successful negotiation with the notorious sect.

The girls, who spoke through their leader, Miss Hauwa Ntakai, made the call while speaking with journalists during a special luncheon organised by the Federal Ministry of Women Affairs and Social Development in Abuja yesterday.

The Chibok schoolgirl noted that government was focusing more attention on the release of the abducted schoolgirls because they were captured inside their college.


She urged the government to also direct its attention to other girls in Boko Karam captivity because, according to her, “the Sambisa Forest is a place of sorrow.”

She said, “We have many of our sisters there that are not students of any school and nobody talks about them. It is because we were abducted from a school that government talked to Boko Haram and they released us. We thank them (government) very much, we appreciate them. May the Lord bless them for what they have done.