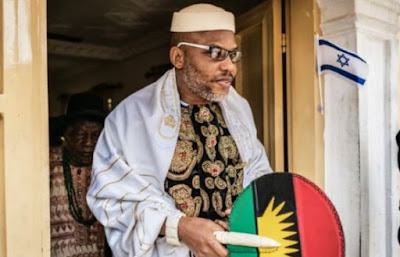 Leaders of the various ethnic nationalities in Benue and Rivers state have asked Nnamdi Kanu to steer clear of their lands in his bid to expand the territory of his proposed Biafra Republic beyond the five states in the Eastern part of Nigeria.

Kanu, the leader of the Indigenous People of Biafra alleged that an agent of the Federal Government, whose name he did not disclose, offered him while in detention, to secede with the five Igbo states but that he rejected the offer because it did not constitute the complete territory of Biafra.

Kanu had while addressing leaders of an Igbo civil society coalition said, “They gave me Biafra in prison with only the five Igbo states; I said no, I want Benue and Rivers states inclusive.”

But prominent indigenes of the ethnic groups in Benue and Rivers states, which he is seeking to annex, described the Biafran agitator as a jester.


For instance, a retired police chief, Abubakar Tsav, said Kanu must be suffering from ‘mental ailments’ to utter such utterance.

He said, “I think the man has some mental problems. What is the connection between the Tivs, the Idoma and the Igbo? I think the man needs to see a psychiatric doctor because something is wrong with him.

“He is not well because nothing connects the Tivs, the Idoma to the Igbo. How can he say he wants Benue State to be part of Biafra? He should stay where he is and carry on with his madness. We are not ready to be part and parcel of his madness”

King Shuluwa described Kanu as “a man with little intelligence who dared lumped Benue as part of Biafra.”

He said, “His level of intelligence is in question, else, how dare him to annex Benue as part of Biafra territory. In fact, if you are looking for more people to be part of your territory, does common sense not say you should have a talk with them?”

Moro corroborated the monarch’s submission stressing that the Igbo language, culture and tradition are clearly different from those of the three tribes in Benue State.

He said, “Benue is not part of Biafra, we do not have any relationship with Biafra in genealogy, culture and by colonial creation, Benue is part of the north.”

Agada on his part, warned the Indigenous People of Biafra and the Movement for the Actualisation of the Sovereign State of Biafra to stop laying claims to Idoma land  as part of their territory.

President-General of Ogbakor Ikwerre Cultural Organisation, Worldwide, Professor Simeon Achinewhu, told Sunday Punch that Biafra failed in the past because there were attempts by the former Biafran leader, late Odumegwu Ojukwu, to force unwilling minority groups into Biafra.

The President, Ijaw Youth Council, Eric Omare, asked Kanu to have a rethink about the territory of the Biafra of his dream and restrict it to the states of the South-East.

Omare said, “The Ijaw nation has said it times without number that the South-South especially the Ijaw are not part of Biafra territory.”